Multiple fires flare up in Sweet Grass on July 29th

Fire Chief Kris Novotny was able to confirm that there were four separate fires. The first fire was the West Fork Dry Creek fire that was about 4 acres of grassland. Big Timber Volunteer Fire Department (BTVFD) and the Sweet Grass County Road Department responded to that fire. As of this morning that fire is contained and is being monitored.

The second fire was located about 4 miles south on the Main Boulder Road. This grassland fire was about 20 acres in size. It was contained and is being monitored. BTVFD responded to this fire.

The third fire was on the Old Boulder Road. This fire was about 5 acres in size and was in grassland, brush and timber. Fire departments from Big Timber and McLeod responded to this fire. DNRC also responded with a helicopter. This fire was contained and is also being monitored.

The fourth and largest fire is in the Whistle Creek area. The Whistle Creek Fire is about 80 to 100 acres.  Fire crews are still manning this fire. Responders include local departments from Big Timber, McLeod, Melville and the Sweet Grass County Road Department. Neighboring jurisdictions from Park County, Stillwater County 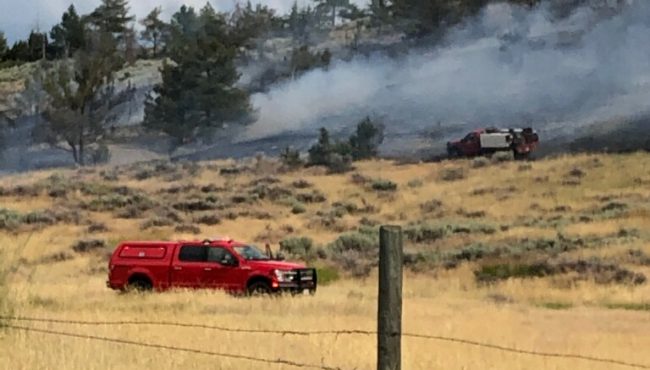 Sweet Grass County Deputies responded to the area for traffic control. At one point, observers parking along the road were partially blocking gates that were needed for access by fire crews.

The large volume of calls and the number of fires that started in a short time frame kept responders extremely busy yesterday afternoon and into the night. Fortunately, the fire departments were able to contain the fires before evacuations were needed.

Sweet Grass County is very appreciative of the quick response by local and neighboring agencies.

Updates will be forthcoming as more information becomes available.