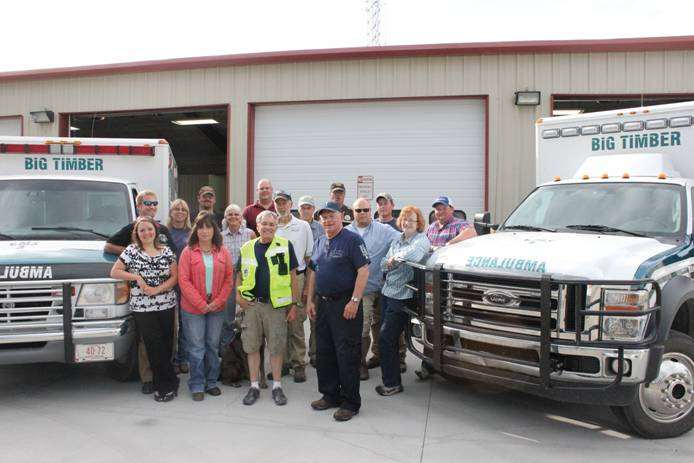 Like most organizations today, Sweet Grass County Ambulance Service had humble beginnings. As you might have guessed in rural Montana, response to the need came from a family who ran a local business-Lowry Funeral Home. They simply offered patients transportation to the hospital, largely because funeral homes were really the ones with vehicles suitable to the need. Doug Lowry, third generation, recalls that because they (the family) offered the service, they gave up “normal” family life since someone had always to be near the phone, 24 hours a day. Doug remembers beginning to help his dad in the 1960’s. During the 60’s and 70’s, things began to change and the “service” needed to go beyond basic first aid and conveyance. Studies by the Department of Transportation and National Highway Traffic Administration stated that accident victims were dying, not so much from their injuries, but from inappropriate or nonexistent care from ambulance personnel. Because of these findings, the DOT wrote the first program for training ambulance attendants, resulting in today’s Emergency Medical Technician. Also, the federal government implemented other requirements, one being that ambulance services operated privately were not able to apply for funds for vehicles and equipment. And since the cost was more and more prohibitive for the Lowry family to assume, Doug went to the County requesting that they take over the service. The County did take it over, utilizing grants and federal monies as they became available. Emergency service radios came into use between hospital and ambulance, and radio communications with the Sheriff’s office was established. No more 24 hour phone vigils. LOTS OF “FIRSTS” The first County ambulance was delivered in the summer of ’72 or ’73, and the first EMTs in Big Timber were Doug Lowry, Jin Sandsness, and Joe Hansen-they took the first EMT class offered in the state. Doug coordinated the first training class in Big Timber. In 1978 the first modular ambulance was purchased whose rough ride was so objectionable for transferring patients that the Ambulance service bought a Cadillac ambulance, one of several used over the years. (Old “Car 11”, the rough rider was, disposed of only a few years ago.) With certification requirements came different responsibilities: the newly trained EMTs learned how to assess patients and to use the tools they had. Today, EMT training covers assessments of the patient, trauma and medical care, plus job description, legal requirements, and documentation requirements. Sweet Grass Ambulance Service is proud of the fact that for over 20 years all EMTs are 100% certified. Sweet Grass Ambulance Service was among the first in the state to train their EMTs in cardiac defibrillation. Joe Hansen served as the first ambulance service Director from 1981 through 1990. Carolyn Osen served as Director from 1990 through 2000. Carolyn retired and Cookie Agnew was elected as Director from 2000 through 2001 when Joe Hansen retook over the Director duties until 2007 when Cory Conner was elected Director. Sweet Grass County Ambulance Service meets the need of the community with 2 EMTs on call at any time, 24 hours a day, 7 days a week. The crew covers the whole County –that’s about 1,890 square miles, responding to approximately 400 of your calls per year.